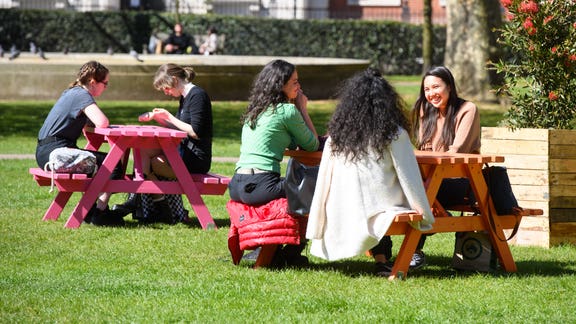 With Brits wondering if summer will ever arrive after week of rain and hail, experts have predicted a Great British summer next month.

As lockdown restrictions ease across the UK, garden get-togethers and afternoons in the beer garden have largely been put on hold as the month of May has been a total washout.

Unfortunately, forecasters predict the horrid weather is here to stay until at least the end of the month with heavy showers and “cold” days, particularly in the north.

But that is all going to change in June with the UK set for a two-week heatwave, according to the experts.

Forecasters at AccuWeather predict a summer heatwave lasting for 16 days starting from June 15.

And it can’t come soon enough as this month could go down as one of the wettest Mays on record in the UK.

The Met Office forecast for this weekend says there will be “sunshine and scattered showers on Saturday.

However, as the UK heads into next week, there are “some indications of temperatures starting to climb towards more typical figures for the time of year,” with this spell of weather likely to “keep nights cooler than the long-term average, but warmer days compared to what we’ve seen recently.”

Mr Suri added: “There are some glimmers of hope in the forecast into next week, with more settled weather possible from Tuesday. In areas of prolonged sunshine, we should be seeing some quite pleasant conditions, but night temperatures will continue to stay stubbornly low.”