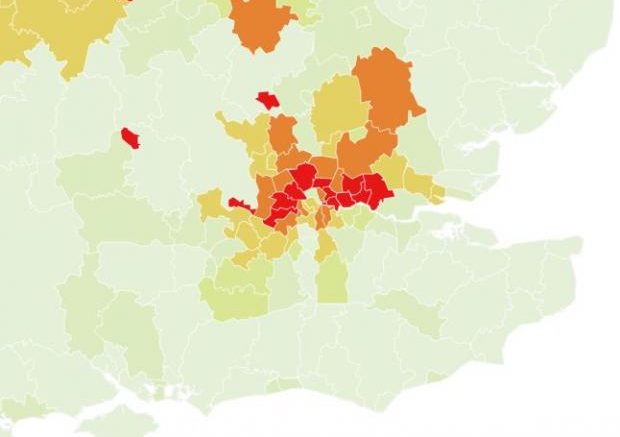 A worrying trend in coronavirus cases in London has been highlighted in a ‘Covid calculator’.

Devised by Imperial College London, the tool predicts which parts of the country have the greatest probability of seeing coronavirus cases rise above 50 per 100,000, which it classes as a “hotspot”.

When visited one month ago, Chelsea, Richmond, Kingston and Bexley were calculated as being at risk of becoming a hotspot.

Now, however, the map shows 21 local authorities in London coloured in red – meaning they all have at least a 75% probability of having cases rise above 50 per 100,000 population.

But the most worrying data on the map comes when looking at its calculations for over the next week.

By October 11, 27 boroughs are deemed to be in the red category.

Speaking last month, lead researcher Professor Axel Gandy, from the Department of Mathematics at Imperial College London, said: “COVID-19 is, unfortunately, very much still with us, but we hope this will be a useful tool for local and national governments trying to bring hotspots under control.”

The website uses data on daily reported cases and weekly reported deaths and mathematics modelling to reported a probability that a local authority will become a hotspot in the following week.

The predictions do assume no change in current interventions (lockdowns, school closures, and others) in a local authority beyond those already taken about a week before the end of observations.

You can view the tool here for more information.

It comes as COVID cases continue to rise across the country.

It comes after several days of confusion as 16,000 cases in England were missed by the NHS Test and Trace scheme.

It led to a large spike of nearly 23,000 cases being reported on Sunday and means that in some clusters the disease was allowed to spread unchecked.

Public Health England (PHE) said a technical issue had meant 15,841 cases between 25 September and 2 October were left out of daily reports.

A problem with an Excel spreadsheet reaching its maximum size has been blamed.

The government said 6,500 staff had been drafted in over the weekend to track down contacts of the missed cases.