Is it beneficial to learn a second language?

Have you ever studied a foreign language? Do you think it is necessary to do so? Research has shown that many tiresome teenagers in the United Kingdom, question why we should learn a distant dialect when English is spoken by hundreds of millions of people across the globe. However, others scrutinise the idea as translation technology is rapidly advancing. Speech impacts the day-day lives of members of any religion, race or nationality. Communication helps us express our feelings, desires, and queries to the world around us. Nevertheless, others perceive the skill to be beneficial, practical and intellectual.

The capability to communicate in multiple languages is turning into an advantageous proficiency for an individual’s career opportunities as research has shown eighty-nine percent of employers in the United Kingdom believe multilingual employees add value to the workforce. Moreover, seventy-five percent of recruitment agencies in England believe that recruiting team members with language skills is important to their organization. Also, communicating directly with new clients and businesses in their native language is one of the first steps to founding a lasting, stable business relationship. Being capable to do this will automatically put any person with incredible language skills ahead of his or her peers in the competition for jobs and high-prestige positions.

Learning a foreign language can also further your native language skills since it prompts your focus to the simple components of language: grammar, conjunctions, and sentence structure. This can cause you to be more conscious of language, and the alternative ways it can be structured and manipulated. The skills developed can assist you in becoming a better communicator and a quick-witted editor and a more intelligent writer. Furthermore, Linguists are proven to develop better listening dexterities, as they have a greater competence at distinguishing intricate underlying meanings from discreet sounds.

Younger polyglots are proficient at interchanging between two different conventions of speech, writing and structure. According to a recent study switching from two divergent languages (“juggling skill”) makes them immensely sufficient multitaskers for the reason that they can switch between two particularly different structures. In a study, participants used a driving simulator while also carrying distracting tasks simultaneously. The investigation found of that people who spoke more than one foreign language performed less errors while driving.

To conclude, the development of the internet allows people from all parts of the world to communicate online. If we speak can communicate in a foreign language, we can speak to people abroad and share ideas and get answers for our questions. Moreover, this could suggest that inability to speak an overseas language is a disability in this modern world. In addition, when learning an unfamiliar language, we can also establish respect for the culture of people who speak that language. Plus, learning a foreign language can open a vast majority of job opportunities across the globe. This can give you a competitive advantage, when entering the job market. In addition, acquiring and studying a foreign language is fundamentally important in a bilingual and multicultural society. It is also necessary in today’s multicultural world where communication is extremely vital. Why not give yourself a possible edge when entering the job market? 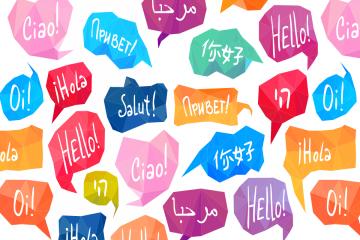