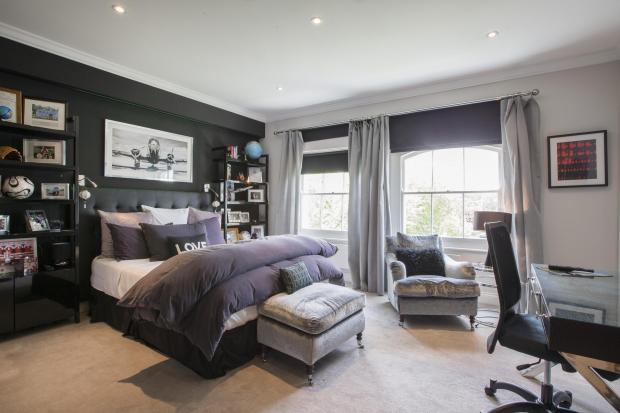 Rihanna’s stunning London mansion has gone on sale for £32m.

The singer had been renting the eight-bedroom property, which is in St John’s Wood, for £18,000 a month.

In addition to boasting a home cinema, the house also boasts a large garden, five stories, and zebra-striped furnishings.

The property was built in the 1800s and was first bought by diamond tycoon Daniel Francis, who was a director of De Beers.

It is decked out with marble floors, silver interiors, his and hers dressing rooms, and silk rugs.

The home also includes a lift, a gym and a fully stocked cocktail bar.

There are six bathrooms, one of which is kitted out with a steam shower and an infrared sauna.

The singer rented the house for two and a half years.

The house is in St John’s Wood Park in London

“The property provides extensive family accommodation benefiting from exceptional entertaining areas, an indulgent principal bedroom suite, a private passenger lift and a very large south-west facing garden,” reads the description of the house, which is being co-sold by Aston Chase.

The estate agent adds that planning consent has been obtained and implemented “to increase the existing accommodation to 1,503.54 sq m/16,183.18 sq ft”.

The house comes with furniture included

Michael Sulkin, director of Aston Chase, said: “This house is the only one of the royal architect John Shaw’s original villas on St John’s Wood Park to have survived into the 21st century.

“The property represents a rare opportunity to be close to central London yet benefit from the V-shaped plot which provides a 90ft garden normally associated with houses much further out in the suburbs.”

The music icon’s own media interviews and Instagram stories have led to wide reporting in the press and social media about Rihanna having the luxurious mansion as her London base for the last two years.

Rihanna’s interviews and Instagram have led to reports and photos in the media about her life in the house including publicity about her enjoyment of the large kitchen for ice cream desserts, the garden for relaxation, local walks and even shopping at Sainsburys.

Rihanna moved back to the US in January this year.

She told the New York Times: “I enjoy walking around the block.

“When I go walking, I try to keep a little incognito.”

The number of new Covid-19 cases may finally be peaking in London, but the strain placed on local NHS services by the pandemic is This Is Local London | News…