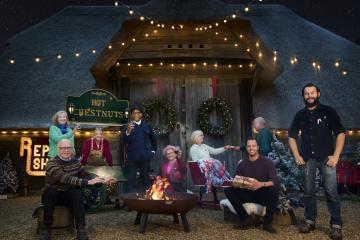 The BBC has announced its Christmas and New Year shows for 2022 with Strictly Come Dancing and Mrs Brown’s Boys making their return.

Last year, Strictly’s Christmas special proved a ratings hit, claiming the most viewers outside of the Queen’s festive message.

The celebrity dancing show saw pop star Anne-Marie and her professional dance partner Graziano Di Prima win, watched by an average of 5.8 million viewers, according to figures from the BBC.

BBC One sitcom Mrs Brown’s Boys, which is often a ratings hit despite being pilloried by many critics, returns with specials over both Christmas and New Year.

Last year’s show did not feature in the top 10 for overnight viewing figures, despite 3.8 million viewers tuning in to the 2020 special.

It won the Bafta for best-scripted comedy in 2012, the Writers Guild Great Britain award in 2014 and has been named most popular comedy TV programme at the National Television Awards five times.

BBC’s Call The Midwife Christmas Special is another BBC staple returning for 2022.

In its 75-minute festive show, the midwives move the maternity clinic into new premises, as the period show covers December 1967.

The Bafta-winning comedy Detectorists also returns after a five-year break for a 75-minute special.

There will be game show specials of Blankety Blank, The Weakest Link, House Of Games, The Hit List, Question Of Sport, Pointless, The Wheel, University Challenge, Would I Lie To You and QI.

The six-part series will be the final chapter of the Happy Valley story, created by Sally Wainwright.

Meanwhile, the final chapter of the trilogy His Dark Materials will also be broadcast over the Christmas period, starring Ruth Wilson and James McAvoy.

The adaptation of Philip Pullman’s novel is a co-production between the BBC and US station HBO.

Charlotte Moore, BBC chief content officer, said: “Nothing brings people across the UK together like Christmas on the BBC and this year we’ve got a world-class line-up like no other.

“Get ready to escape and be entertained with an incredible range of new festive shows across every genre. Live or on demand, there’s something for everyone.

Top Of The Pops returns for a Christmas Day special hosted by Radio 1’s Clara Amfo and Jack Saunders as does Jools’ Annual Hootenanny.

There are many problems in the local area with people throwing rubbish in the streets. If left for a long time, the bins will overflow and can leave a bad smell. Without being emptied, it can also attract rodents, which causes more problems for those living in the area. This Is Local London | News…

Whether you are in Year 7, revising for your first end-of-unit test, or in Year 11, trying to scramble together some kind of organisation system for your GCSEs, studying is the focal point. As a student, there is an expectation that you know how to study. That you were born with the Pomodoro technique already in your brain, and that you did the Blurting technique before your ABCs. Studying, the act that will consolidate our knowledge and boost our grades is something we are never taught. Before I learned the following techniques, studying felt pointless and futile. Why study for hours and make myself miserable, if I’m still going to fall short? Now, implementing these techniques into my everyday schedule, studying isn’t such a chore, and learning feels more freeing and, dare I say it, fun? This Is Local London | News…

Plans to open as a ‘warm space’ for homework and crafting, and a large scale community performance in Waterlow Park are among the Highgate arts centre’s hopes for 2023 This Is Local London | News…